Zoila Frausto: The Princess Who Inspires With Her Fists - Combate Americas
Skip to content
News » 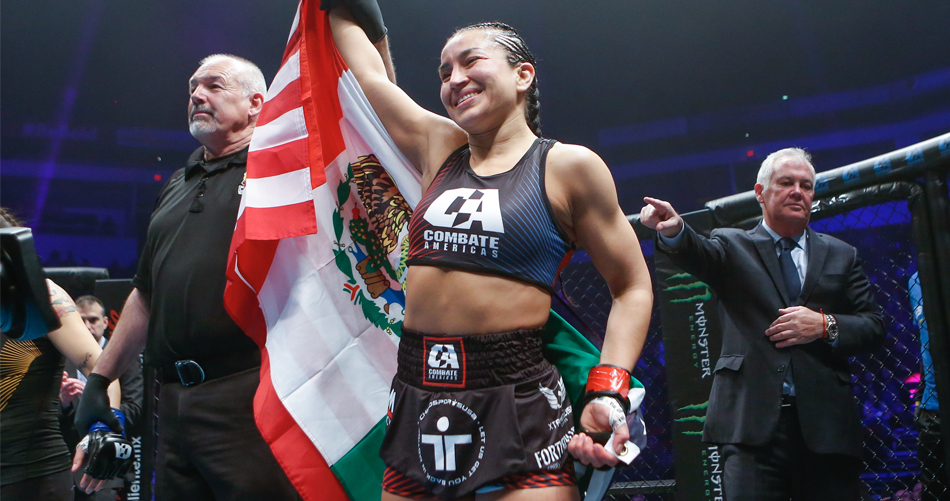 Being one of the most recognized and outstanding athletes in the Mixed Martial Arts (MMA), Zoila «The Warrior Princess» Frausto (14-5), has managed to inspire thousands of people with her career, as well as her actions outside the sport, something that does not surprise the veteran martial artist who will soon return to “La Jaula.”

In a recent interview, the 35-year-old fighter expressed her surprise over the number of people who come to her to show her gratitude for how her career has inspired them, something that greatly compliments the veteran fighter.

“Even though I’ve been doing this for a long time and I’ve been trough an awful lot,” continued Frausto.  “And to be able to get feedback like that it’s amazing. And I love people like that and I love to hear their stories and a lot of the time we’ve become friends with people like that, there’s a connection there, and they’re doing what I’m doing or they’re trying to do what I have done and it’s a great feeling, I love it.”

The nickname “The Warrior Princess” fairly defines Zoila’s conduct, a fighter coming out of Fresno, California. However, it was not a nickname she chose herself as so many other fighters do, it was given by someone else who saw these outstanding qualities in Frausto.

“‘The Warrior Princess’ came from when I first started long time ago,” said the former champion. “Jasper Tayaba, my first Muay Thai coach, he’s Filipino, so he had trouble saying my name so every time that he was saying Zoila it was like: ah just -Z-, whatever just -Z-. And one day he just came in he was like, you know what? Xena -The Warrior Princess- because you’re a warrior but you act like a princess all the time too.”

Last day of wrestling with Coach @AlexanderMunoz55 @TeamAlphaMaleMma before our fights next week. Can’t thank Coach Alex, @urijahfaber & all the guys at Team Alpha Male enough, for always being so damn helpful, welcoming and kicking our asses to help us get better! Love you guys! Much gratitude! ❤️?????? @GenahFabian in NY for #PFL on Thursday & I fight on Stockton, CA. on Friday! I still have tickets so hit me up ASAP! Don’t miss our fights y’all! We will bring the heat for sure!???? #CsaTamConnection

“So I was like: let’s not do that please. And He just ran with it and he just kept using it and I was like okay, I guess it’s stuck. But I mean, it fits me, it does pretty well because when I go in there I fight and I’m a warrior to the end but on the outside I’m still a woman, I still like to do womanly things, so I can be a princess too.”

Frausto made her promotional debut at Combate Américas: Mexico vs. USA, an event held in her hometown and where she dismantled Jaimee Nievera via TKO in the very first round. She is looking for her second victory in the promotion; but more importantly, she wants to be treated like she deserves after so many years in the sport and admits that she has achieved it inside Combate Americas.

“The experience with Combate Americas has been amazing,” said Frausto. “I can’t even remember the last time I’ve been treated the way that I’ve been treated here, which is one of the main reasons why after that first fight I was like: Let’s sign… I’ve been fighting for such a long time, what’s more important to me is how I’m gonna be treated, I’ve been doing this for a very long time and I just felt like I needed to be treated properly and that’s what I’m getting here.”