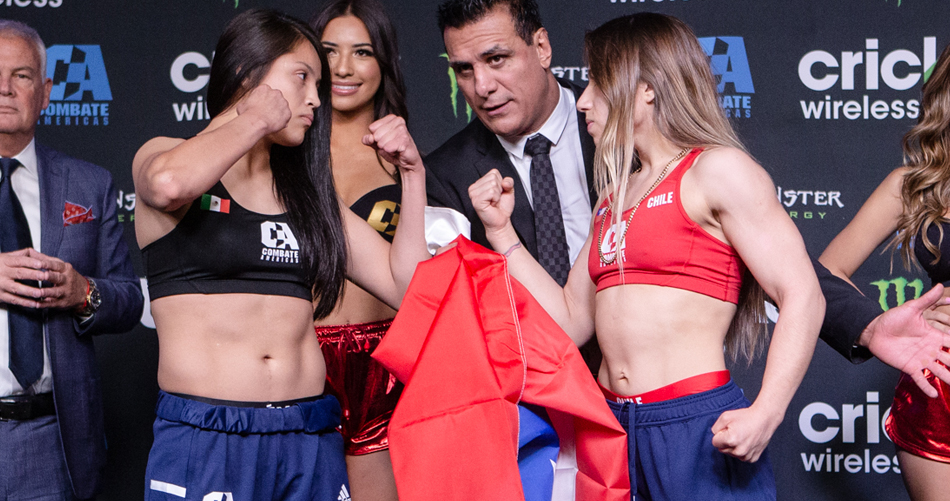 Today, fighters hit the scale and faced off. It’s one day before the historic “Combate Americas: Combate Reinas” Mixed Martial Arts (MMA) extravaganza at the Galen Center in Los Angeles, CA, which will air live on television in the U.S. in Spanish on Univision (12 a.m. ET/PT), UDN (12 a.m. ET/9 p.m. PT) and in the U.S. and Canada in English on DAZN (10 p.m. ET/7 p.m. PT) on Friday April 26, 2019. The event marks the first time an all-women’s MMA lineup will be broadcast live on network television.

The weigh-in event was also streamed live on Facebook Watch.

Main event fighters Melissa “Super Mely” Martinez (5-0)and Caroline “Taz” Gallardo (3-2) weighed in at 115.5  pounds and 116 pounds, respectively, for their 115-pound strawweight showdown. Martinez, the undefeated knockout artist from Mexico City, Mexico has won all of her fights but one by (T)KO while Gallardo of Santiago, Chile will be looking for her fourth consecutive victory.

Submission specialist Kyra “Mogwai” Batara (7-4) of Las Vegas, NV weighed in at 115.9 pounds while her opponent in the strawweight match Francis “Hitgirl” Hernandez of San Juan, Puerto Rico came in at 116 pounds.

Oscar “Jacaré” Suarez (128.4) was the only fighter to fail making weight, 2.4 pounds above the flyweight limit for his scheduled fight against Michael Reyes (125.5). Suárez will be fined twenty percent, which will go into his opponent’s purse.

How to watch Combate Reinas