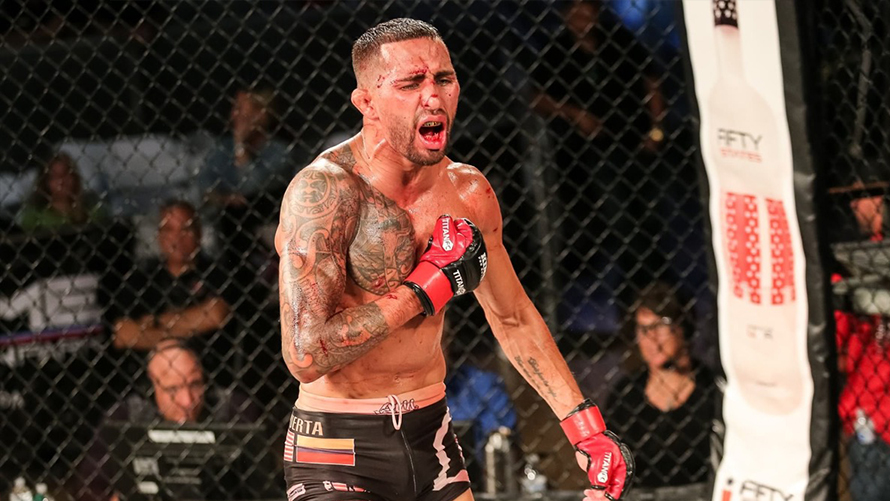 Puerta (18-6) meets David Duran (8-6) inside la juala for the promotion’s inaugural flyweight title at the upcoming August 28 event. The fight card will take place at a state-of-the-art closed set in Miami, Fla and will air in English on AXS TV and in Spanish on Univision and TUDN USA.

As a child, Puerta, 32, born in New York, traveled to Colombia ever five years, but when he turned 18 years-old he decided to visit the South American country frequently.

“When I went back at 18, I just fell in love with my culture. People are nice,” he said. “You go there, and you have a good time. The food, culture and people are amazing. They make me feel at home.”

He later added, “I have family and some of my best friends are there.”

His parents, Maria Salazar and Camilo Puerta arrived in the United States chasing the American dream. After his parents divorced, he and his mother moved to Atlanta.

Although Colombia is miles away from Georgia, his mother shared her roots with her children cooking favorites like arepas de carne y queso (steak and cheese), Ajiaco (chicken soup with corn, rice and potatoes), and others.

“My mom would make arepa every morning,” said Puerta, who also cooks some Colombian dishes himself.

Aside from spending time with family and friends, he gives back to young athletes in an effort to teach the future of Colombian mixed martial artist.

“I’ve done seminars in Pereira, Barranquilla and everyone is welcoming”, the champion said. “They know I am a world champion.”

Recently, Puerta held a flyweight championship in a Florida based promotion.

For the flyweight, Colombia is not only paradise but competition.

“The last time I fought, I felt at home since I won a title the Colombians have been very supportive of me,” said Puerta who fought three times in the country.

Family and friends packed local restaurant establishments to watch his fight on television when he fought in the country. He anticipates that when he competes for the Combate Americas title, fans will be tuned in.

“They need someone to represent them,” he said. “Combate Americas hasn’t had any Colombians represent them so wining the world title can level it up and they can get behind us.”

One of his goals is to compete in Colombia under the Combate Americas banner.