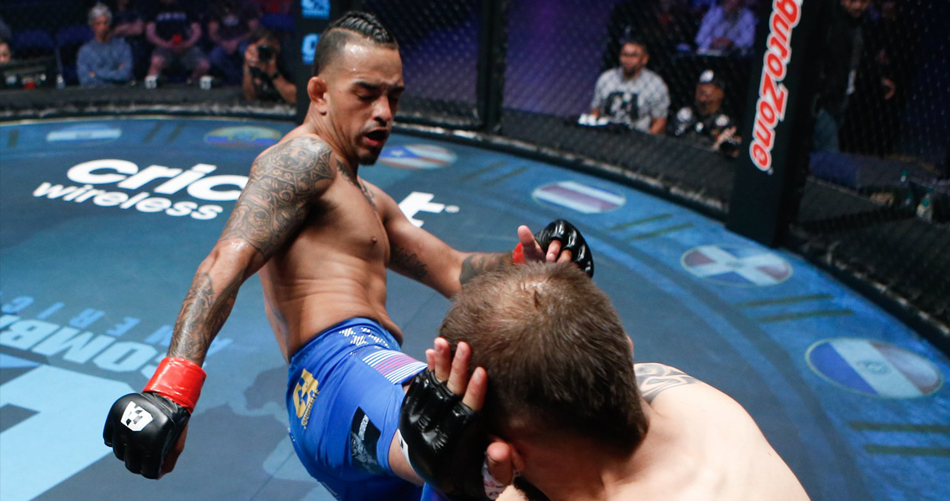 In a three-round war that kept “Combate Americas: Stockton Presented by Cricket Wireless” fans on an adrenaline rush. Erick Sanchez (9-4) got an important victory in his backyard over Alex “Bam Bam” Velasco ( 8-4), improving his status in the 155-pounds division.

Sanchez, who had just lost a fight outside the promotion, returned to pick things up where he left them last time he entered “La Jaula”. After a first round where he convincingly dominated Velasco using good boxing combinations and takedowns, he went through a bump in the second where Velasco had his moments.

However, later in the third round, Sanchez handled the clinch and takedowns very well to dominate his opponent, keeping the pressure on Velasco who seemed without an answer as time expired. It is the first decision win for Sanchez since he did it back in 2014 when he faced Drey Mitchell.

In addition, Hector Sandoval (15-4) put on an incredible performance, defeating Jorge Calvo (10-5) by unanimous decision and managing to convince the judges to award 10-8 assaults on several occasions. Sandoval used his wrestling, one of his strengths coming from the Team Alpha Male camp, and managed to capitalize on his great technique and physical strength.

Another highlight of the night was Spanish fighter Irene Rivera (9-6), who entered “La Jaula” looking for an important victory for her and her country, getting past Charisa Sigala (4-1), who suffered her first professional loss.

“Combate Americas: Stockton Presented by Cricket Wireless” was live in the U.S and Canada via DAZN, Univision and Univisión Deportes Network (UDN). The event was also broadcasted on Facebook Watch for Latin America and rest of the world.