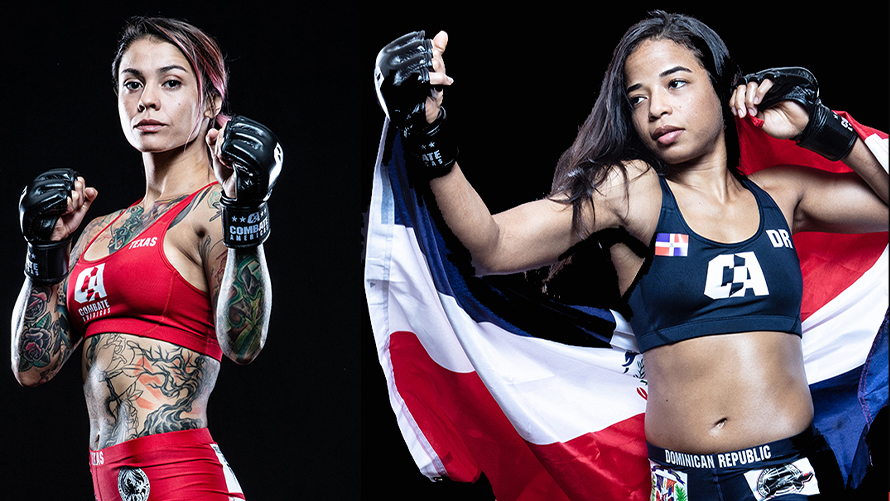 LIVE IN THE U.S. ON UNIVISION, TUDN USA AND AXS TV;LIVE IN MEXICO ON TELEVISA CANAL 5

The 30-year-old Yanez of Waco, Texas was nearly crowned the first-ever Combate Americas female world champion in her last start on December 7, before finding herself on the losing end of a close, controversial split decision to undefeated phenom Melissa “Super Mely” Martinez.

Prior to the defeat, Yanez made a stunning Combate Americas promotional debut last June 21, stopping Paulina Vargas in the third round (1:54) by way of technical submission (ankle injury).  The victory gave Yanez her fourth straight win.

Fighting out of Philadelphia, Pa., the 27-year-old Adames, who was born in the Dominican Republic, will seek her third consecutive victory in La Jaula, the Combate Americas competition cage, following a second round (1:47) TKO (knee strike) of Marisol Ruelas on September 1, 2019, and a unanimous decision over Alma Cespedes on October 18, 2019.

Prior to making her professional debut, Adames was perfect as an amateur competitor, reeling off a 4-0 record.

In other action announced today for the August 28 card, unbeaten Elvin Espinoza (3-0) of Miami will square off with fellow unbeaten rising star Rudisel Mora (5-0-1) of Miami in a lightweight (155 pounds) contest.

The live broadcasts of Combate Americas closed set studio events, additional dates for which include Friday, Sept. 11 and Friday, Sept. 25, will feature on-camera interactions with a host of different celebrities to be announced soon.

The broadcasts will also include fan polling and voting, as well as a social media ticker on-screen that will give viewers the opportunity to see social media conversations about the event in real time.

Combate Americas previously announced, for the closed set studio events, a series of safety measures that the company is putting into place, including its acquisition of a dedicated physician to administer COVID-19 testing of all athletes, officials and staff prior to the show and to supervise the health of all personnel on-site in Miami.

All Los Angeles, Calif.-based Combate Americas staff will test for COVID-19 prior to departing for Miami, utilizing the free testing recently made available to the public by Los Angeles County.

All athletes and their respective corner people as well as all Combate Americas staff and officials will undergo both COVID-19 and antibody testing in Miami, in accordance with the new Florida State Boxing Commission requirements.

Prior to the COVID-19 pandemic, Combate Americas began the year with a world championship event that, in its midnight ET time slot, garnered 511,000 live Univision viewers and 2.2 million live Televisa Canal 5 viewers.

Feeling nervous before a fight or commentating is...