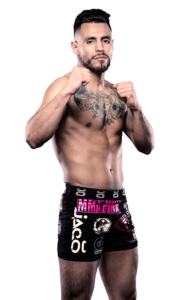 Danny was a sergeant in the Marine Corps for seven years and at his last duty station, they had a fight team. Danny saw them training and had an opportunity to train with them, which eventually led to his first amateur fight. Danny quickly fell in love with competing and was hooked from there. As a fighter, Danny likes to watch UFC featherweight upstart Yair Rodriguez, as well as his own teammate Alan Jouban. Danny doesn’t watch much UFC outside of highlights and likes to instead focus on his training partners. While he dreams of one day making it all the way to the top, Danny wants to take his time to do things the right way. Outside of MMA, Danny likes to spend time with his family and works part-time as a bouncer in Sacramento.

Even though his last fight didn’t end with the result he wanted, Danny was pleased to know he could make the necessary adjustments on the fly. He also recognized that he needed to improve his conditioning. Danny respects Erick as an opponent, believes he is technically sound, and looks forward to proving his fist win over “Ghost Pepper” was not a fluke. His nickname, “The Realist,” came from a friend in high school, who scribbled it on his backpack and it stuck, because it defines his personality. He’s always keeping it real, not just with other people, but with himself, as well.

4 of 6 victories came via knockout. Originally from los angeles, relocated to northern california. Former sergeant in the u.S. Marine corps for seven years.

Adrian Guzman vs Danny Ramirez: One for the Books

Spain’s Oscar Suarez dazzles with his footwork thanks to dancing