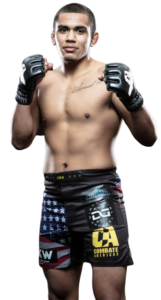 Adrian Guzman from Parlier, California, learned karate as a kid. He played on his high school football team, but when he was 17, a teammate got him into wrestling, Muay Thai, and Jiu Jitsu. Adrian hopes to remain undefeated but is completely willing to take fights on short notice. Adrian goes by the nickname “El Castigador,” which is Spanish for “The Punisher.” His favorite post-fight meal is tacos. He previously went to trade school for ventilation. When he’s not fighting, Adrian enjoys watching movies at home.

Adrian Guzman vs Danny Ramirez: One for the Books

Spain’s Oscar Suarez dazzles with his footwork thanks to dancing