Combate Americas, the world’s premier Hispanic Mixed Martial Arts (MMA) sports and media franchise, today announced its inaugural women’s world championship bout and co-main event for the highly-anticipated ‘Tito vs. Alberto – What Side Are You On?,’ live pay-per-view television extravaganza from Payne Arena in McAllen, Texas on Saturday, Dec. 7.

Priced from $30, tickets for the Combate Americas ‘Tito vs. Alberto – What Side Are You On?’ live television event hosted by TS-1 Promotions, are on sale at Ticketmaster.com.

“This is going to be an epic showdown – ‘Super Mely’ vs. ‘Dirty Dez,’ Mexico vs. Texas – in the first Combate Americas women’s world title fight in history, right smack on the U.S.-Mexico border in McAllen,” said Combate Americas CEO Campbell McLaren.

At stake in the matchup between Ortiz and “El Patrón” is the previously announced, winner-take-all title belt challenge that will see the victor walk away with the loser’s coveted, championship belt.

At 21 years of age, Martinez of Mexico City, Mex. will aim to become the youngest Hispanic world champion in MMA history.

To date, the Combate Americas discovery turned human highlight reel and number one ranked pound-for-pound female fighter in Mexico has been unstoppable with her Muay Thai-based arsenal, notching five of her six professional career victories by way of (T)KO.

Similarly, the 29-year-old Yanez of Waco, Texas proved to be the real deal when she made her Combate Americas promotional debut in Hidalgo on June 21, pulverizing the previously unbeaten Paulina Vargas of Mexico into technical submission (injury) in the third round (1:54) of their matchup. 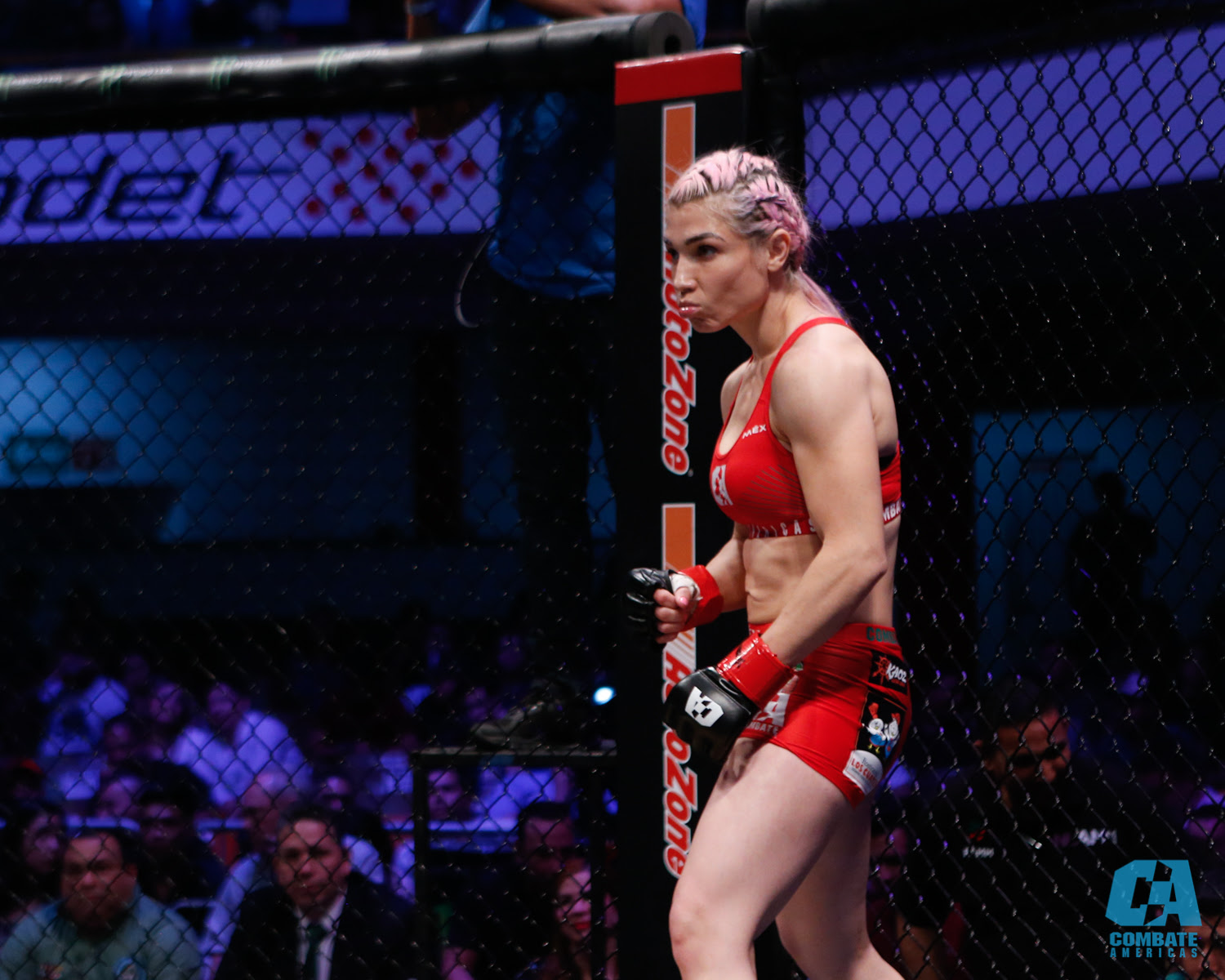 Above: “Sexy” Dulce Garcia will compete in a featured, live televised Combate Americas fight against fellow MMA upstart Marisol Ruelas.  Undefeated as a professional boxer and a former Lucha Libre world champion, Garcia became a three-sport athlete earlier this year when she made her MMA debut under the promotion of Combate Americas.

The 37-year-old Garcia of Monterrey, N.L., Mexico was the first women’s world champion in the Lucha Underground television series, and holds an unblemished, 5-0 record in professional boxing.

Garcia officially became a three-sport athlete when she made her MMA debut under the promotion of Combate Americas on April 12, dominating Mariana Ruiz Avila to earn a unanimous decision.

Ruelas is a 22-year-old prospect fighting out of Chicago, Ill. and looking to rebound from a second round (1:47) TKO (knee strike) defeat at the hands of undefeated Criszaida Adames on September 1.

Prior to the loss, Ruelas had earned an impressive, second round (2:59) submission (rear-naked choke) win over Corrie Ward in what marked Ruelas’ Combate Americas debut on March 29.

Additional bouts for the Combate Americas ‘Tito vs. Alberto – What Side Are You On?’ live television extravaganza at Payne Arena will be announced soon.

COMBATE AMERICAS ‘TITO VS. ALBERTO – WHAT SIDE ARE YOU ON?’
UPDATED FIGHT CARD

Stars come out in full force for historic...

Weigh-In Results – Tito vs Alberto: What Side...