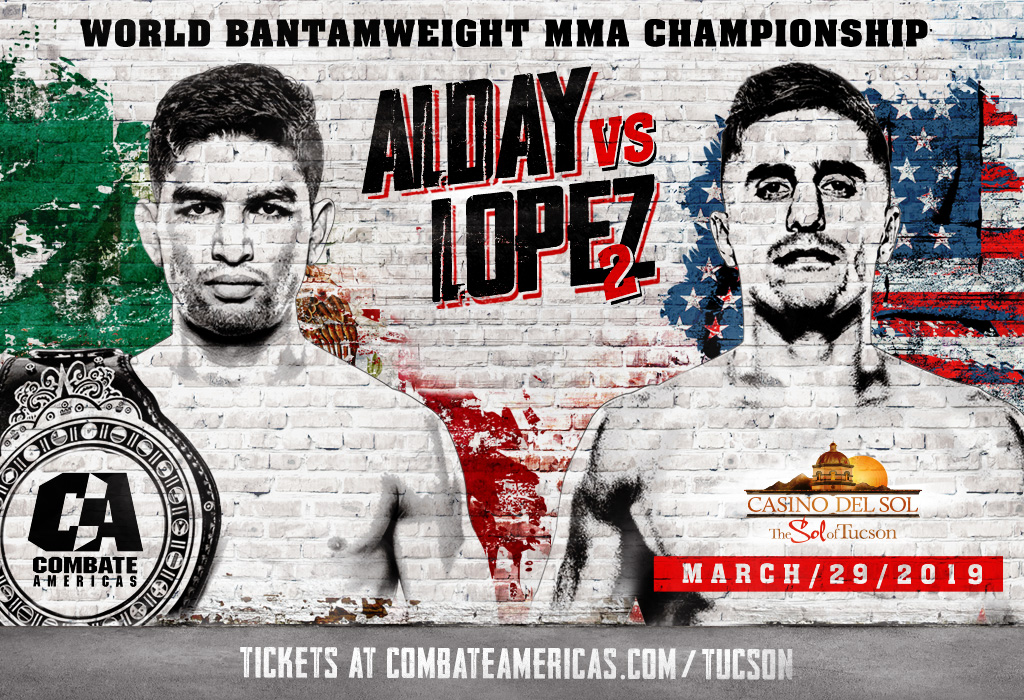 Tickets for “Combate Americas: Alday vs. Lopez 2” go on sale on Monday at CombateAmericas.com/Tucson. *Only for 21 years of age or older.

“This is an incredible rematch that had to happen after these two fought an all-out war for three straight rounds,” said Combate Americas CEO Campbell McLaren.  “If their rematch is anything like their first meeting, we will have a ‘Fight of the Year’ candidate on our hands.”

In featured action also announced today, Kobe “The Stunna” Ortiz (16-7) of San Manuel, Ariz. will face off with James “Loose” Cannon (7-4) of Tucson in a middleweight (185 pounds) contest).

In one of two women’s bouts, unbeaten Codie Wareham (2-0) of Phoenix, Ariz. will collide with Gabby Romero (2-3) of Los Angeles, Calif. via Albuquerque, N.M. at strawweight (115 pounds) while, in the other, Marisol Ruelas (0-1) of Chicago, Ill. Will face off with Corrie Ward (0-3) of Tucson.

The rematch between the 27-year-old Alday of Tucson and the 30-year-old Lopez of Las Vegas, Nev. via Yakima, Wash. comes six months after the two stars collided with the vacant title at stake in a unique, three-round championship bout in Phoenix, Ariz.

The two engaged in a relentless, see-saw battle that went the distance before Alday walked away with a razor-thin, split decision that left unfinished business in La Jaula, the Combate Americas cage.

To arrive at their initial meeting, which also marked his first world title bout, Alday notched a split decision over superstar John “Sexi Mexi” Castaneda before an audience of over 4.6 million live television viewers across the U.S. and Mexico on Univision and Azteca 7, respectively.

The championship victory represented a major milestone for Alday, a Dreamer who was born in Hermosillo, Sonora, Mex.

The rematch will mark the third time that Lopez, a stable member of MMA legend Randy “The Natural” Couture’s Team Couture, quickly rebounded from the loss to Alday, defeating Vicente Marquez of Spain with a von flue choke just 50 seconds into the first round of their meeting at “COPA COMBATE” on December 7.

To date, Lopez owns five victories in Combate Americas action, four of which he produced with (T)KO or submission.

Additional main card matchups, as well as the preliminary bout card for “Combate Americas: Alday vs. Lopez 2” will be announced soon.

Combate Americas To Be On AXS TV