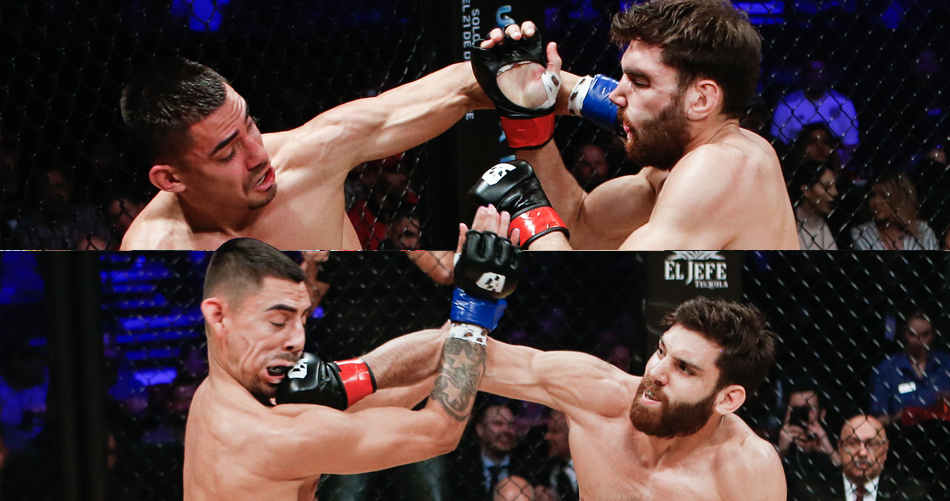 With the first Combate Americas’ featherweight world title fight announcement, the hype around the men meeting inside “La Jaula” is growing fast, as the American, Andres “Bullet” Quintana (18-2), will face the Argentine Bruno Cannetti (8-6).

Combate Americas and @tuffnuff present an electrifying night of MMA: Two World Championship belts will be on the line, on Aug. 23 in Lake Tahoe! #CombateTahoe #QuintanaCannetti #LópezRuquet

Quintana and Cannetti  first fought each other in a controversial fight in early December of last year.  Each fighter was representing his respective country in Copa Combate 2018, an 8-man-tournament where the winner takes home a prize of 100,000 dollars.

Cannetti, 30, defeated Joey Ruquet decisively in the quarter finals of Copa Combate, via TKO in just 1:32 into the first round, sending a clear message to his next opponents.

On the other side of the bracket, Quintana faced Marlon Gonzales. “Bullet” won the fight by unanimous decision. It was Quintana’s 6th-consecutive victory in Combate Americas, and he moved into the semifinals with Cannetti.

In the semifinals, both fighters threw everything they had. Cannetti managed to knock down Quintana with a powerful right hand in the first minute of the first round, putting the American in real danger. However, Quintana managed to recover from began to throw his own  combinations in aggressive fashion until the fight was stopped for volume of strikes over the course of a minute. The stoppage was viewed as controversial, with some (include Cannetti himself) feeling that the Argentinian fighter should have been allowed to continue.

Andrés Quintana advances to the final

Watch this explosive fight, where Andrés Quintana secured his place in the grand final of #CopaCombate?.

Quintana continued his path in Copa Combate 2018, facing the talented Alejandro Flores in the tournament final.  Quintana defeated Flores via KO with a spinning elbow in the middle of the first round.  Quintana took home the coveted Copa trophy.

Cannetti, who is brother of veteran Mixed Martial Arts (MMA) fighter Guido “Ninja” Cannetti, had a 7-5 record before coming to Combate Americas, including four finishes, 3 of them by (T) KO. Since he came exclusively for Copa Combate, the Argentine fighter has just a 1-1 record inside “La Jaula”, and now seeks to clean up the only loss in the company with a win over Quintana.

Quintana has the longest active winning-streak in Combate Américas with 8 victories in a row. Within his eight victories, 2 of them have been submissions and another two by KO, for a 50% finishing rate.

Quintana will have to be careful against a fighter who has experience against him and believes he should have won his last fight. Cannetti will have to adjust again his strategy and his abilities to no fall on the same errors that led him to defeat last time.

Can Cannetti erase the stain of defeat and achieve Combate Americas gold on the road? Or will Quintana be the one to get into history as the best featherweight fighter of Combate Americas?

How to Watch: Combate Americas Tahoe